“The criminal is the creative artist; the detective only the critic.”

Chris Blackwater is a chartered engineer from Leeds.
He began writing to entertain himself while working away on offshore oil platforms, power stations and shipyards. His career has taken him all over the world to many
unusual locations and introduced him to some remarkable characters.
His short stories have appeared in a variety of publications and anthologies.
In recent years Chris has gradually drifted down to the south coast of England where he now spends his spare time kayaking and sailing on the Solent.
His debut novel Emergency Drill was short-listed for the Crime Writers’ Association
Debut Dagger Award in 2020. 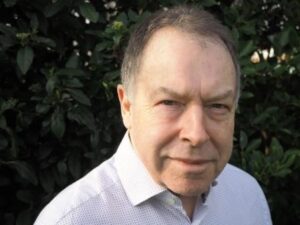 Graham Donnelly was born and brought up in London.
He spent much of his life in Suffolk and Essex in the east of England and has worked in government service,
international banking and as a lecturer in Economics and related subjects.
Graham wrote five academic books before turning his hand to fiction.
He received acclaim in 2019 for his first novel Mussolini’s Chest and followed this up with the equally successful
Unwritten Rules published in 2020.
His third novel, Take One Life, was released in February 2022