“I haven’t anything to offer. There isn’t any help. We are all alone, all of us from the moment of birth until we die. Our past is our present and our future. We have to live with ourselves until there isn’t any more time left. If you want salvation look to yourself. There’s nowhere else to look.” 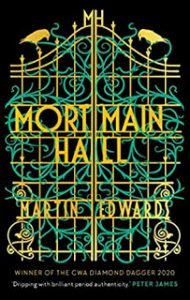 What Martin Edwards doesn’t know about Golden Age crime fiction would probably fit on the back of a first-class stamp, so it comes as no surprise that when he sets a novel in 1930 and locates a large part of it in an English country house, every detail rings with period authenticity.

That’s not all. Other locations include a sleazy Soho nightclub with connections in high places, a village pub bursting with quirkiness, and a railway carriage complete with the net luggage rack and bench seating which may be live in the memory of, ahem, more mature readers. There’s even a second country house with wild animals in the grounds, a trend which was only just beginning at the time.

The characters all have history in the best tradition of the sub-genre. Centre stage are Jacob Flint, a sharp-eyed crime reporter with ambition, Leonora Dobell, an eccentric self-styled criminologist with a war-damaged husband, and Rachel Savernake, independent and fiercely intelligent daughter of a notorious judge now deceased. Also involved are a reluctant civil servant, an army officer with an agenda and three people acquitted of murder – not forgetting the three Truemans, Rachel Savernake’s trusted servants who are more like family to her.

After a careful laying down of story threads littered with well-disguised clues in the best Agatha Christie tradition, all the leading players head north to rural Yorkshire. Leonora has invited the acquitted murderers and Rachel to her family home, Mortmain Hall, where, naturally, the threads are become even more knotted until Rachel untangles them and initiates that genre highlight the big drawing-room reveal…

With meticulous and detailed research, scratch-them-and-they-bleed characterisation and locations you can smell and touch, Edwards has added his own unique style to a format beloved of Golden Age fans. The result quite different from the contemporary Lake District series his readers may find more familiar, but nevertheless a masterclass.

Mortmain Hall is the second novel featuring Rachel Savernake and Jacob Flint. They make a formidable team, ably abetted by the three Truemans, and are set fair to add a whole new dimension, not to mention a new contingent of readers, to a sub-genre which already has plenty of aficionados.

Martin Edwards was born 7 July 1955 at Knutsford, Cheshire and educated in Northwich and at Balliol College, Oxford University, taking a first-class honours degree in law. He trained as a solicitor in Leeds and moved to Liverpool on qualifying in 1980. He published his first legal article at the age of 25 and his first book, about legal aspects of buying a business computer at 27, before spending just over 30 years as a partner of a law firm, where he is now a consultant. He is married to Helena with two children (Jonathan and Catherine) and lives in Lymm. In 2007 he was appointed the Archivist of the Crime Writers Association and in 2011 he was appointed the Archivist of the Detection Club.

Lynne Patrick has been a writer ever since she could pick up a pen, and has enjoyed success with short stories, reviews and feature journalism, but never, alas, with a novel. She crossed to the dark side to become a publisher for a few years and is proud to have launched several careers which are now burgeoning. She lives in Oxfordshire in a house groaning with books, about half of them crime fiction.