“Every man at the bottom of his heart believes that he is a born detective.” 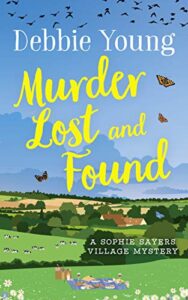 Sophie Sayers is very happy with her life in the village of Wendlebury Barrow in the Cotswolds. She loves her home, a cosy cottage that she inherited from her late aunt, who had been a remarkable lady, both a world traveller and a renowned author. Sophie also loves her job at the village bookshop, Hector’s House, and has even warmer feelings for the bookshop owner, her boyfriend, Hector.

Although the business belongs to Hector, Sophie has contributed a lot to the way the bookshop and its tea shop has prospered; her latest innovation is to suggest that Hector should sell some of the vast quantity of second-hand books that he has accumulated, and she is pleased when he says that he has decided to go ahead with this idea. However, her contentment is ruffled when Hector informs her that he has employed an eighteen-year-old school leaver, called Anastasia, to put the second-hand books online before she goes to university in the autumn. Sophie is in favour of putting the books up for sale, but she is hurt and annoyed that Hector had made this decision when she was in Greece on a writing retreat.  What is worse, he has not informed Sophie of his plans in the two months since her return; indeed he only mentions it on the day that the girl is due to arrive at Hector’s House. Sophie is even more dismayed when she meets Anastasia, who is very beautiful and so scantily dressed that Sophie feels positively dowdy in comparison.

Sophie’s day goes from bad to worse when she visits the local school to deliver some new books and set the school library straight. Because it is the school holidays most of the staff are absent, and only the school business manager, Ella Berry, and the caretaker, Ian, are on the premises. Sophie and Ella are close friends and Sophie feels surprised when she is rather unwelcoming; Sophie thinks Ella must be stressed because she has so much work to do and because she is afraid that she might lose her job if Wendlebury Barrow School has to combine with another school, a common threat to many small, rural schools. In order to help Ella out, Sophie decides to surprise her by clearing out the Lost Property cupboard. Along with some overdue school library books, shoes, PE clothes and a lot of rubbish, Sophie discovers the body of a man, dead and already cold.

Sophie hurries to fetch Ella but, outside the Lost Property cupboard, Ella faints. Sophie and Ian take her outside the school, and she revives, then Sophie sends Ian to investigate the body in the cupboard, but when he returns he insists that there is no body there. Sophie is convinced that she has not made a mistake, but Ella is the only person who believes her, and when they phone the police, they are scolded for wasting police time. When Sophie tells Hector what has happened, he is sympathetic but sceptical, and tries to rationalise away Sophie’s experience. To add to Sophie’s worries, she receives a vaguely threatening anonymous letter, and wonders if this is connected with her discovery. Despite the multiple problems confronting her, Sophie is not daunted, and she is determined to find out the truth about the body in the cupboard.

Murder Lost and Found is the seventh book in the series featuring Sophie Sayers and it contains many of the regular characters that have been introduced in the earlier books. It has a gently intriguing plot and a cast of likeable, well defined characters who contribute a great deal to the humour of the story and the ambience of the village. It is a thoroughly enjoyable, easy-read, feel-good book that I recommend.
——
Reviewer:  Carol Westron

Debbie Young was born and raised in Sidcup, Kent. When she was 14, her family relocated to Germany for her father’s job. Debbie spent four years at Frankfurt International School, broadening her outlook as well as gaining the then brand new IB (International Baccalaureate). She returned to the UK to earn her BA (Hons) in English and Related Literature at the University of York, then lived and worked for a while in London and the West of England as a journalist and PR consultant.  In 1991 she moved to the Cotswolds. In 2002, she married a Scot named Gordon whom she met in Swindon – and not, as village rumour once had it, a Swede named Scottie.  In 2003, her daughter Laura was born.  Best Murder in Show was the first in her series featuring Sophie Sayers. There are now a further three books in this series.

Carol Westron is a successful author and a Creative Writing teacher.  Her crime novels are set both in contemporary and Victorian times.  Her first book The Terminal Velocity of Cats was published in 2013. Since then, she has since written 5 further mysteries. Carol recently gave an interview to Mystery People. To read the interview click on the link below.